By her own admission, actress Beth Allen is the queen of organisation. She bought her first house aged 19 and has been known to do her taxes during hair and make-up.

But her plans for giving birth naturally were literally turned upside down at the last minute when her unborn baby boy refused to relinquish his breech position.

“We tried everything,” says the 32-year-old, as husband Charlie McDermott nods in agreement. “I got acupuncture and had Charlie burning sticks by my feet. I did self-hypnosis, I lay upside down on an ironing board propped up against the couch. I even went to the hospital to have him turned manually but my stomach muscles were too tight – I knew those sit-ups were a bad idea at the time!”

But nothing would budge the bubba, so Beth was told the safest option was to have a Caesarean at 39 weeks – and Sidney Jolyon McDermott was born on May 6. 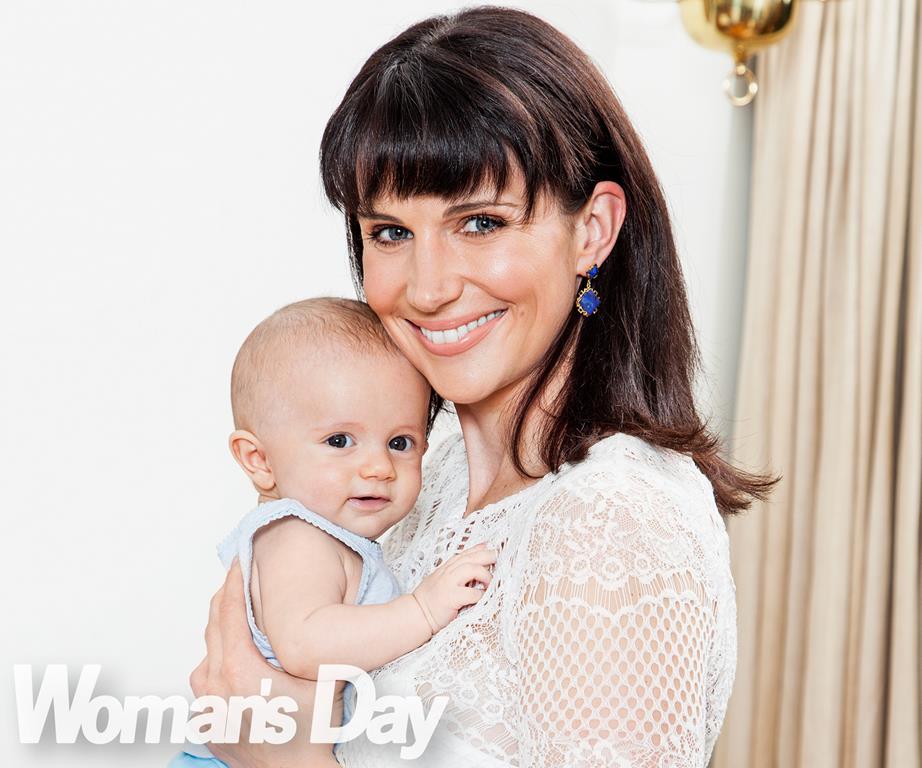 “I was initially quite disappointed because I had wanted to have a natural birth,” smiles Beth, who played scheming Dr Brooke Freeman in Shortland Street. “But once I knew the date, I went into proactive mode again. The day before, I went and got my hair blow-dried. I just thought, ‘Bugger this! If I can’t have a natural birth, I might as well just enjoy it and look good in the photos!’”

As Sid beams his way through our Woman’s Day shoot, it’s clear he’s already picked up a few tips from his photogenic mum. The 17-week-old heartbreaker smiles as Beth explains his old-fashioned-yet-cool moniker.

“We really liked Sid and then we realised it was also a family name – my great-great-grandfather was Sidney. He can be Sid to his mates and Sidney when he’s a barrister,” she laughs.

But while Beth was more than ready for the birth, hubby Charlie’s needle phobia meant that he was a bit shaky. “I hate needles,” tells the 33-year-old media consultant. “I was white as a ghost! I definitely struggled, but Beth was very stoic. She’s amazing.”

To the soothing strains of “Fish in the Sea” by Kiwi favourites Fat Freddy’s Drop, Sid made his grand entrance.

“It was like a stereotypical ray of light when he arrived,” recalls Charlie. “It hits you like a train, the relief and the joy that he’s OK.” Beth reveals her healing was so speedy that “recovering from C-sections should be listed as my super-power”.

Beth’s father Jolyon, from whom Sid takes his second name, teaches business management at Auckland University. But when he comes home from work, he puts the tot in a front pack and takes him for a stroll.

“People look at us a bit funny because they can’t figure out who he belongs to,” laughs Beth. “Dad always says, ‘He’s not mine!’ It’s really nice to have several pairs of extra hands around.”

“It’s so special for Sid to be so connected to his extended family and this place,” adds Charlie, a theatre producer who’s also currently working with creative production agency Augusto. “There’s nine new dads at work, so I’ve been learning lots of fatherhood tips round the water cooler!”

Despite putting their plans to return to the US on the backburner, the couple, both US permanent residents who moved to New York two years ago to chase career dreams, are planning a trip to Hawaii later this year to procure Sid his green card. But for the next year or so, their hearts and souls will be firmly back in Aotearoa.

“I’ve always been very driven,” says Charlie, “but as soon as I had a child, my value set changed overnight. It was a realisation to say bugger the career and American ambitions, and spend time in New Zealand doing what we actually want and what’s good for our baby. You stop – finally – worrying about yourself! It’s like, ‘Oh, good, all my worry can go on this little person now.’ Every day something new happens,” he marvels.

Home for the new family is currently Beth’s parents split-level West Auckland home, where the family’s dogs appear disinterested in the new addition – unlike his besotted grandparents.

The proud parents have already taken their baby boy to one of their favourite Kiwi places – the Coromandel’s Whangapoua, near New Chums Beach, where Charlie proposed to Beth. “That place is so magical,” smiles Charlie. “It was so great to take Sid there. He loved it.”

For her part, Beth’s loving having her sister Dinah – freshly returned from a long stint working overseas – and mum Laraine around while workaholic Charlie gets stuck into his creative work projects.

“It’s meant I’ve been able to go back to the gym – another good thing about living with the grandparents,” smiles the svelte new mum. “I just say, ‘Do you wanna look after the baby for an hour? And they go ‘yes!’”

“That’s really massive for me,” says Charlie. “I consider work my hobby too, so I work crazy hours and it’s really good for Beth to have such incredible support at home.” Concludes Beth, “Having Sid has also made me realise that the biggest clichés about babies are true. You really don’t know just how much you are going to love them.”