Beth Allen hit the big 30 on May 28th and celebrated together with her bestie Antonia Prebble (who also turned 30), throwing a big 90s theme costume party on June 7th. 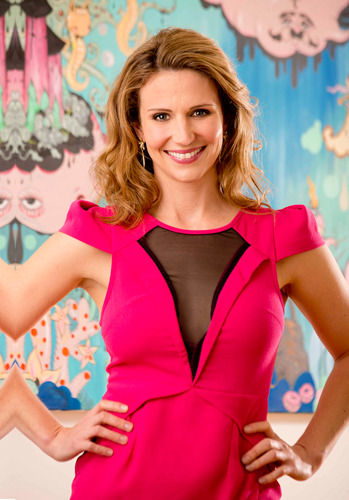 Shortland Street’s Beth Allen readily admits she never imagined her life past 22 years old. So as she sat down to a glass of bubbles and mushrooms on toast on the morning of her 30th birthday, it was something of a pleasant surprise to reflect on how well everything has worked out.

While many face the big 3-0 with trepidation, the soap star, who plays Dr Brooke Freeman, is embracing the new decade.

‘I’m more excited about my thirties than I was my twenties,’ enthuses Beth, who saw in the big day with adoring husband of three years Charlie McDermott.

‘I feel really good. I married a lovely man and I’ve got great friends, quite exciting plans and big goals on the horizon

‘I definitely feel like I’m going to be a better person in my thirties. I might just rock it out.’

While there’s plenty to be grateful for in her life, one special relationship stands out for the stunning actress.

To celebrate the exciting milestone, Beth teamed up with her best friend, The Blue Rose star Antonia Prebble, to throw an epic ’90s-themed bash, where they were joined by Shortie cast members including Sally Martin, Amelia Reid, Jacqueline Nairn and Ria Vandervis.

’I’ve always loved it. I grew up in the ’90s and I loved Friends and Alanis Morissette and Ab Fab. At primary school we drove everyone insane by calling each other “sweetie darling” (Ab Fab’s catchphrase) constantly.’

While she loves reminiscing, Beth is just as excited about the future. ‘I want to travel more, I’d like to go and study again and I’d like to have some babies, fingers crossed,’ she says. ‘Those are my top three. I don’t want to put too much on the bucket list or I’ll be overwhelmed.’

Despite her enthusiasm, Beth admits to a few nerves about her changing appearance as she ages.

‘While it’s great to look good and feel good for yourself, there’s a pretty high standard for women in film and TV and it’s a lot of work,’ says Beth, who works out five to six times a week

‘If I’m going to act for a living I’ll have to work even harder as I get older. I’m interested to see how I’ll feel about it. Maybe I’ll have kids and decide I can’t be bothered anymore.’

But Beth hasn’t always handled challenges so calmly. She recalls being 18 years old and vowing to quit acting if she wasn’t making a living from it by 28.

‘I worried a lot about how things were going to work out. I felt quite anxious I was never going to be able to do what I loved,’ she says, revealing she once considered throwing it all in for a career in advertising.

‘There were a few years where I felt a bit stuck. There are still moments in life where I think, “Oh God, is this going to be all right?” But they feel like worried days rather than months now.’

‘Angela Bloomfield [Rachel McKenna] is older than me but she is so young at heart and really enjoys the moment-to-moment stuff,’ she says.

It’s an outlook Beth hopes to emulate herself

‘My motto this year is to turn fear into curiosity. I don’t care so much what people think now. I can trust my instincts on things and know I’m probably taking myself in the right direction.’